The Winds Of Change

Because the World is Round... has relocated.

The winds of change have blown in, and the time has come for me and Jamie to move on.

I have very much enjoyed organizing and writing this blog, and I hope that our friends and perhaps a few who we have not met have enjoyed reading what I have offered up. At times, it has seemed more of an exercise in keeping my own sanity than anything else. It was also an exercise in perseverance. It seemed important to me to keep the blog going, even after some difficult times, even when I was not sure that I had anything interesting to offer, even when I feared that no one was reading it, and even though I have lagged at times. Now, I am happy to report, the exercise has paid off. I am still relatively sane, and the experience of setting up, experimenting with, and maintaining this blog has led to several new opportunities.

I have exported the entire blog to a new url. So if you missed anything or found something comforting or cheering or maybe even inspiring that you would like to read over again or share, it's all over there, now.

My work as the editor of the Expat Daily News Latin America and related work will require quite a bit of my time. Jamie is writing many articles, as am I, plus we have responsibilities of moderating comments, fielding questions from readers, and doing research on issues from all over Latin America that are of interest to expats and potential expats.

Additionally, I have been invited to participate in an upcoming blogger feature at Truthout.com, so I will be active on my new blog, Connectively Speaking, which is my expansive project to synthesize the whole of existence, to illustrate how everything is interconnected, as an antithesis to what I see as the fragmentization of reality by twitters and text messages and sound bites that feed an insatiable desire for more and more input of less and less real substance and meaning. Participation by anyone who would like to contribute is encouraged!

And don’t forget to check out my eBooks. You can read at least the first 10% of these eBooks for free at the links provided.

From Zürich to Moab, from tropical Polynesia to the farthest corners of Australia, this multi-layered journey seeks connections between every aspect of the cosmos, from the musical sphere to the stratosphere - and beyond.

While my husband and I lived in Uruguay, I wrote. It was a contemplative time, and as I tried to identify what it was about Uruguayan culture that I found so beguiling, as I dealt with loss, as the birds, the ocean, the sun and the moon spoke to me, a philosophy became. 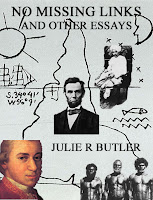 No Missing Links and Other Essays

Posted by Julie R Butler at 1:03 PM No comments:

Links to Julie's other web activities